Knowledge, Structure, and Other Stuff

Knowledge, Structure, and Other Stuff – The State of Semantic MediaWiki 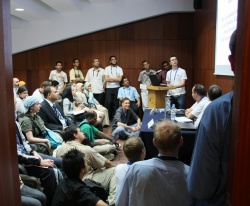 This talk gives an introduction to Semantic MediaWiki and reviews its current state as of July 2008. The talk is targetted towards a mixed audience and starts with a general introduction to structured knowledge and its use in Wikipedia. It also includes a live demo of various features, based on the links given below.

Links for the online demo

The talks contains an online demo that shows and explains several functions. Links to the according pages (state July 19 2008) are given below.

Other formats for lists

As of Juli 2008, the most recent publication that gives a general description of Semantic MediaWiki is Semantic Wikipedia (JWS2007). A collection of all works related to the topic are found under semantic wikis. Most recent details about the SMW system are given in SMW's online documentation.